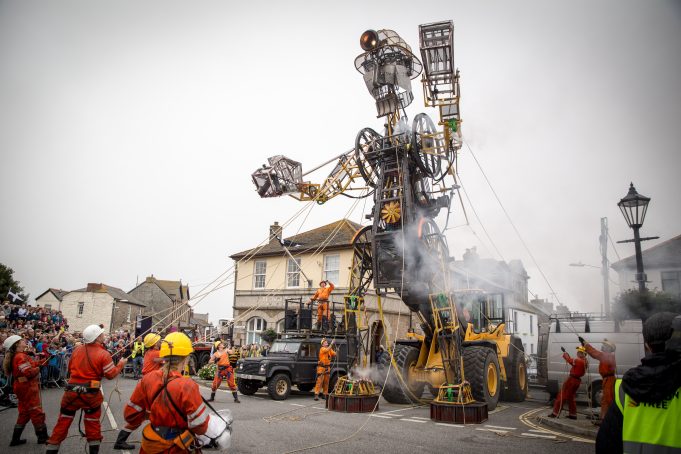 Cornwall’s colossal engineering miracle is set to rise again and come to a spot near you!

After recent news of the win of the ‘Best Arts Project’ in the prestigious National Lottery Awards, it has today (Friday 13th October), been announced that the largest mechanical puppet ever constructed in Britain will rise again next Easter in a sparkling ‘Resurrection Tour.’ The Man Engine, powered by Volvo, steamed the length of the Cornish Mining World Heritage Site last summer, unearthing a deep lode of passion and pride. Now, the colossal mechanical miner is set for his Resurrection Tour across Cornwall and Devon, before he drives further, into Somerset, South Wales and up to the North of England.

The creator of the Man Engine, Will Coleman of Golden Tree Productions, said: “Our big boy is setting off in the footsteps of the Cousin Jacks, but he needs to say a proper farewell to Cornwall, and our friends just over the Tamar in Tavistock, before he goes onto Radstock in Somerset on the first UK leg of the epic global tour that we hope one day to achieve.”

On Saturday 31st March 2018, the Man Engine will re-appear where he was last seen: at Geevor Tin Mine in the ultimate West. Then he heads east; on Easter Sunday 1st April he will be at Heartlands. On Easter Monday (2nd April) he will visit Cornwall’s ancient Stannary capital, Lostwithiel. He crosses the Tamar to Tavistock on Tuesday 3rd April.

He will then travel to the old coal-mining town of Radstock in Somerset for Fri 6th April, before heading onwards to South Wales (from Sunday 8th April until Thurs 12th April) and then onto Ironbridge in Shropshire, Elsecar in Yorkshire, and to the foremost mining and quarrying equipment show at Hillhead Quarry, near Buxton in Derbyshire.

Will Coleman explained the difference between the new daytime and night-time events which will take place at each of the Cornish, Devon and Somerset venues saying: “Our ‘Afternooner’ will give families and Big Kids the chance to really get to know their favourite giant miner: there will be an industrial-scale feast of fun and frolics. The ‘Afterdarker’ promises an edgier explosive experience including white-hot pyrotechnics – sparks will fly! Suffice to say, we are cranking up the experience that held everyone spellbound last year and can’t wait for people across Wales and England to meet him for the first time.”

Will also announced an affordable Earlybird Ticket scheme for the Somerset events saying: “Last year 150,000 residents and visitors from across Cornwall and West Devon, managed to see the Man Engine. It all went pretty bonkers and, due to the colossal demand and excitement, we had to encourage people not to come to certain events that we were expecting to be really busy and some people even got turned away!”

Will continues: “So this year, we want to make sure that everyone who is keen to see the Man Engine can definitely know that they will get to see him at a certain location, at a certain time. So, we are going to sell 3,000 super cheap tickets for each event. These Earlybird Tickets will be available at just £5 per person (adult or child) for just five weeks, starting from … now! We really hope people will want to come out and support The Man Engine again. Perhaps buying tickets for friends and family for Christmas presents. There’s a lot extra on offer this time around and where else can you get such a sight and experience for just FIVE POUNDS?”

Julian German, Chairman of the Cornish Mining World Heritage Site Partnership, who created the initial commission which led to the Man Engine said: “It’s obviously wonderful news for everyone in Cornwall, Devon, Somerset, South Wales and Yorkshire that the Man Engine will be journeying to a spot near them next year. In commissioning the Man Engine in 2016, to celebrate our Tenth Anniversary of gaining World Heritage Status, the Cornish Mining WHS Partnership sought a visionary project that would both reflect the ingenuity and entrepreneurialism of our ancestor’s whilst also promoting to the world the fact that we still possess these qualities today. We certainly found this in the Man Engine.”

Cllr German continued: “The World Heritage Site is also very pleased to be announcing another educational project to run alongside the 2018 Cornwall and Devon tour dates, ensuring that young people learn about and are inspired by our tradition of technological innovation. In attempting to come up with their own solutions to the greatest technological challenges facing the Cornish Mining industry in the 18th and 19th centuries, they will gain important skills and learn how the historical solutions to those challenges moved the Industrial revolution forward and changed Cornwall, and the world, forever.”

Mark Bishop, Participation Co-ordinator of the Natural Theatre Company said, “As a resident of Radstock and member of the Natural Theatre Company I was delighted to hear that the Man Engine was coming to our Somerset town. It is so exciting to have this spectacular event by the world renowned Golden Tree productions. I have been running arts events with the community of Radstock for the last few years and I know that they are going to love it. Large scale street performance very rarely comes out this side of Bath so to have a show of this magnitude come here is a real coup.”

Mark continued, “The mining heritage of this area is very deep and can often get forgotten or overlooked. But to bring such a celebration of that heritage and the people involved here will uncover that history, re spark those memories, lift the spirits of the locals and help them connect with the past. There is a great deal of change going on in Radstock at the moment so to have an event that draws a direct line from the present through the last two hundred years will bring new and old residents together in this wondrous event. Let the Man Engine arise in Radstock and I’m sure he will be welcomed with open arms and a glass of cider!”

Laurel Penrose, Principal and Chief Executive of Bath College said: “We are proud to be hosting the Man Engine when it visits Somerset next year. Our Somer Valley Campus is located in the former mining town of Radstock, where coal was mined as far back as the 19th Century, and this campus was originally opened in the 1940s to serve the mining community. The town is extremely proud of its mining heritage and we are delighted to offer the opportunity to our local community to come together and celebrate its past.”

Laurel continued, “Bath College’s Somer Valley Campus is a fitting location to host this excellent demonstration of engineering skills. The Man Engine is an exceptional piece of manufacturing which demonstrates the ingenuity as well as the technical ability of engineering practitioners. It is an engaging celebration of the talent forged from past experiences with relevant and essential skills of today.”

Nick Allen, CEO of SMT GB, distributer of Volvo Construction Equipment in Great Britain says, “We are really pleased to be supporting the Man Engine once again for his resurrection tour in 2018 by providing the wheeled loader that powers this magnificent feat of engineering. We’ve been proud to support this project since the beginning when Volvo powered the Man Engine’s first steps back in July 2016 and we can’t wait to see him back in action next year.”

The Man Engine Resurrection Tour 2018 Earlybird tickets are available for each of the Cornwall and SW England events from manenginetickets.com at £5 per ticket (plus an additional £1 booking fee) for five weeks only or until 3,000 tickets have sold for each event. The ticket price will then increase up to £10/£12/£15 until the events themselves next year.

The ‘AFTERDARKER’ promises an edgier extravaganza; an explosive experience including white-hot pyrotechnics – sparks will fly!
• Calling all INDUSTRIAL HERITAGE FANATICS – celebrate the mining, smelting, casting, foundry and forge work of our revolutionary past
• Calling all ENGINEERING ENTHUSIASTS – even greater miracles of super-scale puppeteering science on show
• Calling all VERTIGO JUNKIES – crazy stuff will be going-on at giddy heights

Zenith Youth Theatre Company are on the road to Edinburgh

Let's connect! Reply to this tweet with your name, profession and website/email! Retweet this but make sure to comment on the original post so everyone's contact details are on one thread :D Niklas Aarre - Theatre Director - niklasaarre.co.uk Let's Connect to Create

'Reading is magic, and magic is for everyone' - @CressidaCowell We are super excited @bathkidslitfest and partners have been inspired by Cressida to bring children and families the FREE Reading is Magic Festival. Find out more here: bit.ly/2DwJJQt #ReadingIsMagicFest pic.twitter.com/dvK57o9Dm8

Is there a forum where we can all (directors, designers, technicians, actors, carpenters, stage managers, producers, electricians, programmers, writers, production managers - EVERYONE) just get together and vent? I reckon it would be healthy, therapeutic and constructive.

A quarter of freelance theatre workers have been unable to access emergency income of any kind and a third are considering leaving the industry, a survey of more than 8,000 participants from @FreelancersMake, @StageDirectors and @curtaincall has found bit.ly/2BXd9Hl pic.twitter.com/Obj606DxaT

Let's connect! Reply to this tweet with your name, profession and website/email! Retweet this but make sure to comment on the original post so everyone's contact details are on one thread :D Niklas Aarre - Theatre Director - niklasaarre.co.uk Let's Connect to Create

'Reading is magic, and magic is for everyone' - @CressidaCowell We are super excited @bathkidslitfest and partners have been inspired by Cressida to bring children and families the FREE Reading is Magic Festival. Find out more here: bit.ly/2DwJJQt #ReadingIsMagicFest pic.twitter.com/dvK57o9Dm8

Is there a forum where we can all (directors, designers, technicians, actors, carpenters, stage managers, producers, electricians, programmers, writers, production managers - EVERYONE) just get together and vent? I reckon it would be healthy, therapeutic and constructive.

A quarter of freelance theatre workers have been unable to access emergency income of any kind and a third are considering leaving the industry, a survey of more than 8,000 participants from @FreelancersMake, @StageDirectors and @curtaincall has found bit.ly/2BXd9Hl pic.twitter.com/Obj606DxaT

© Theatre Bath 2011 - 2020. All Rights Reserved.
We use cookies to ensure that we give you the best experience on our website. If you continue to use this site we will assume that you are happy with it.OkNoPrivacy policy